Meeting happiness in the library. The Happy 5!

In Greek mythology, the owl is the servant of the Goddess Athena, and is known as the holy bird (used by gods). It is a messenger that symbolizes wisdom, and has spiritual powers, able to resolve all kinds of natural issues hidden from human eyes, and protect humankind.

Its Japanese pronunciation "fukurou" also means happiness, and this bird is seen as a bird of happiness in Japan.

In English, the saying "as wise as an owl" is evidence that the English-speaking world regards owls as a symbol of wisdom.

We have four mascots that represent our visions of Reading, Exploring, recreAtion, Learning. The "pi" in the names is abbreviation of the name of the new hall "public information." It symbolizes that they are messengers of wisdom that assist us in promoting a public information service. They, with the popular book-transportation robot BOPI, form the "Happy 5"!

In facing with the tides of digital convergence, we once mentioned we will actively transform into a "REAL Library" in the "Globalization: The Library's New Role" seminar. The definition and direction of development of R.E.A.L. will be explained below. 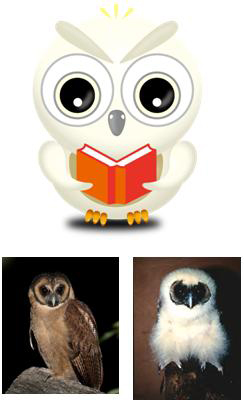 • Younger brother. He is a speed reader with great organizational logic skills. Mathematics and IT questions? He's your man.

• He is the second largest in size child in Taiwan's owl family, and a big guy in the primeval forest.

• He is a juvenile owl that just left his nest. He has a fluffy and white body with a browning face. Isn't he just adorable? Because his feathers are not fully matured, so is only capable of short jumps. 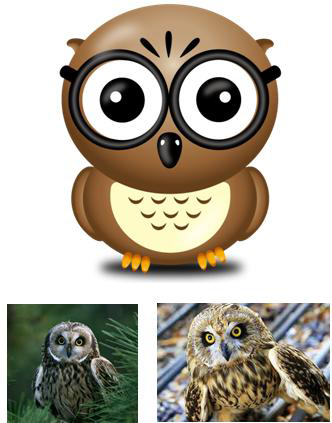 A popular guy with a positive attitude. He is always curious of the new and unknown, and loves natural science.

The "ear" tufts on his head is not prominent, and would only perk up when alerted. It belongs to the family of plain owls.

He is a lone wolf. He flies without making a sound, making him a stealthy hunter that hunts in the day. He's known as a "Natural Born Killer". He's ultimate skill is flapping his wings without actually moving an inch. 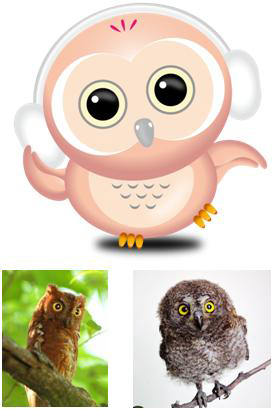 Younger sister. She is everyone's source of laughter. She loves going to expos and listening to music, and her favorite subject is art.

She has a tiny body, with a dark gray beak and claw tips. Her feathers are a gradient of colors from bright red to gray. Currently in Taiwan, most of them are either brown or red. Generally speaking, the younger they are, the more they tend to be red.

When resting at night, they often chirp in a short "oww" sound. 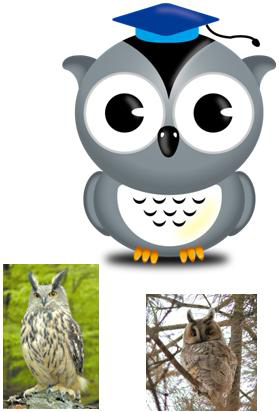 Big brother. The living encyclopedia of the forest. He continues to enrich himself, and is extremely knowledgeable in history and geography.

He has a relatively bigger and more prominent earholes under the feathers, which play crucial roles in sound localization and hunting. The long ear tufts on the head have nothing to do with actual ears.

He's somewhat of a homebody: staying on the same branches and does everything on there.

He's usually a lone wolf, and hunts by the road at night.

Gemini, 6/3. Younger sister. She lives in the spotless Book Drop area, and sometimes moves about in the Child Learning Center. She's the center of attention whenever she appears, and must be accompanied by professional nannies to complete her mission. She can ferry books up to 40kg at a time!

BOPI's name is voted by the readers. Every mascot of the library has a "PI" (public information) in its name, that added with "books" become BOPI!

BOPI is a joint-effort with the Precision Machinery Research & Development Center. Its primary mission is to automatically transport the returned children's books to the Child Learning Center. BOPI knows four languages, and serves as a storyteller, as well as the spokesperson of the library. Click here for more!

The four visions are our expectations that the National Library of Public Information can become a place for reading, exploration, and life-long learning for all, enabling the general public of all ages and groups to find the services and spaces suited to their needs. Our ultimate goal is to become the most important "third living space" for the general public outside of work and family.