This library is one of the new 10 major construction projects, completed after 8 years, spending 20,000,000 dollars. It is the first national-level digital library. From the initial stages on the drawing board, this new library was Taiwan's first case of regarding the building itself as a public art, submitted to be evaluated by the Ministry of Culture. It was hoped to bring a new experience in public art and life-aesthetics concepts to the general public; however, due to many reasons, it ultimately failed.

Yet, we did not give up. We then applied to the local government instead of the central government, and became the first example in the central regions to adopt the method of inviting the planner to compete in the selection process. Based on the foundation of architectural aesthetics, the planner demonstrated his creativity by inviting artists and art teams of an established quality standard to participate in the creation of public artworks, forming a synergy. After 1 year of hard work and planning, they completed 3 permanent public artworks just on time for the opening of the new library, and conducted the "JOY Reading Public Art Festival", attracting close to 130 thousand people.

The library arranged to invite national and private art, design, creative, aesthetics units, foundations, colleges, and universities all year long to hold exhibitions and events that emphasize both physical and digital elements. Self-constructed databases such as Digital Art Gallery Picture Book Database are further specific achievements of integrating life aesthetics and aesthetic education for the library.

The library has put the public artworks before the eyes of the general public in a close-to-life, aesthetic, and educational way before and after they were set up. We continue to lead all other 526 public libraries in the nation to create places of happy reading across all corners of Taiwan through a new public art atmosphere and consolidation of life. We expect ourselves to become an important driving force in the promotion of public art, and become the navigator in establishing architectures as public artworks, the implementer of the public's participation in public art, and the advocate of the art of living for all citizens.

By: Zunzhi Yang
Concept:This work started out from the concept of "reading unlimited". The constantly flowing symbol "∞" that represents infinity leads to vanishing point visuals of multiple dimensions. The stainless steel and marble materials create an indicator visual image in the center of the plaza with futuristic lines of handwriting. The work is also integrated with the functions of a resting seat, actively inviting the viewers to merge into the meaning of meditating on the infinite future together, agglomerating the imaginations of educational reading. 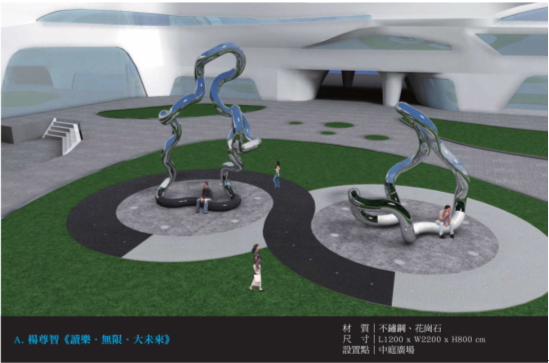 By: Zhongjie Xu
Concept:This work is inspired by the famous artwork "Genesis". The quantified clear glasses formed the looming lighting sculptures. The hand of contact is comprised of thousands of components, and every stylized glass unit transforms into the digital language of 0s and 1s from characters of different languages. The contact of fingertips symbolizes the contact point in opening up the future, and how the digital library plays the important roles of the "knowledge conveyor" and "creator". Looking at the work from afar, it harbors the image of the library receiving guests, leading a tour of the evolved era of digital knowledge and Internet-learning. 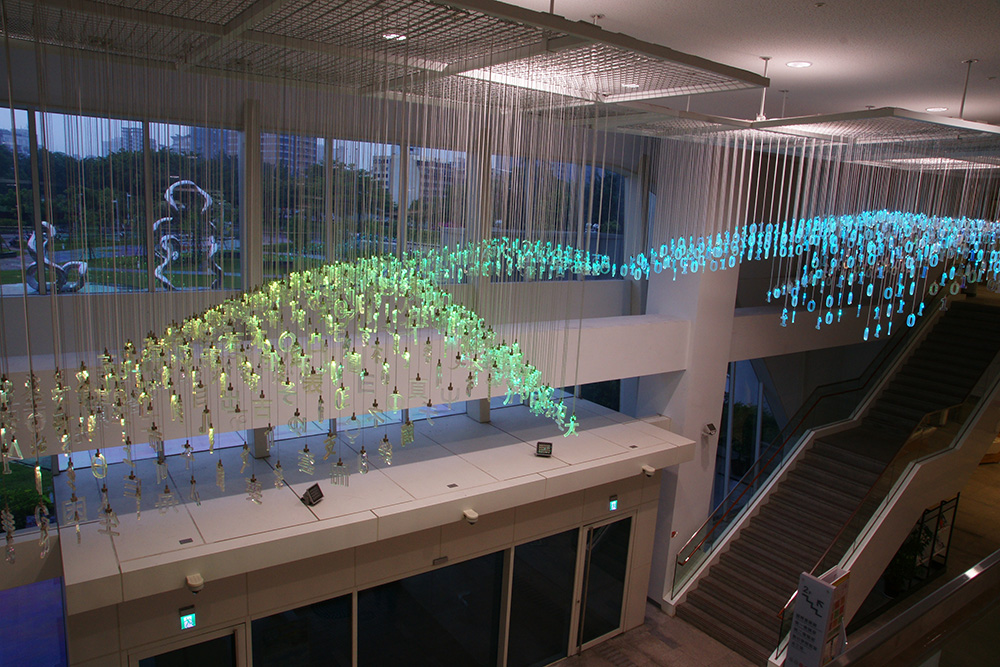 By: Jiaqi Lin
Concept:The concept of this artwork is to re-integrate books into the living space of the general public, and to further create a thematic atmosphere filled with imageries of reading. The artist Lin Jiaqi cited the image of books stacking on the selves, and transforms it into sculptures of hardcover books with granite, scattered on the sidewalks around the library in the form of street furniture. The books, as if growing out of the ground, are waiting for the passersby to read them. The friendly appearance of books in the likeliness of chairs invites the viewer to sit and learn knowledge, intuitively expressing the imagery of libraries. It has both artistic beauty and practical functions. At night, the colored glasses create light and shadows, conveying the brilliant symbolism of knowledge being as precious as treasures.