About Our Multicultural Services 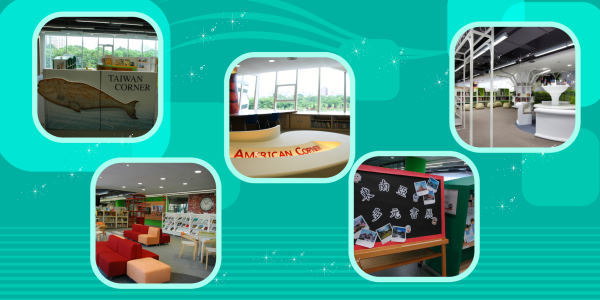 With the current trend of globalization, Taiwan has become even more tightly linked with other countries around the world. Culture can no longer be represented by any one viewpoint, but a convergence of the mainstream and the diverse. The National Library of Public Information is a national-class public library aimed to service the general public, providing all audiences a just, free, timely, and convenient right to books and information. In respect of all ethnic groups and to demonstrate multicultural values, we promote multicultural services in hopes to provide audiences domestic and foreign alike a quality educational and leisure resource via our events, services, and collections.

Our current multicultural services can be categorized into four different aspects. In addition to the American Corner, French Corner, British Corner, which we signed a cooperation agreement with, we also provide services for new immigrants from Southeast Asia. The three respective Corners are located in the multicultural service area on the third floor, while the Southeast Asia New Immigrant Collection is located in the foreign language collection area on the fifth floor. Southeast Asian Cultural Exhibitions are held irregularly beside the Senior Exhibition Area on the third floor, including book fairs and cultural fairs.

On January 20, 2005, we signed an agreement with the American Institute in Taiwan to establish Taiwan's first American Corner. We currently have over 4000 collections selected and sent by the US Department of State to introduce American cultures and literature. Various events are held periodically every month, averaged at 70+ events every year, including English story time, English news, and cultural seminars. After we moved, the new American Corner has been setup in the multicultural area in the new location. It was designed with a theme of the Grand Canyon, equipped with two touch-screen computers to provide easy access to e-books, virtual tours, and a tour of the Foundation for Scholarly Exchange website.

On June 16, 2011, we signed a memorandum of agreement with the French Office in Taipei to establish Taiwan's first French Corner. The French Corner located in the multicultural area on the third floor in the new location is a representative French cultural plaza, occupying an area of 145 square meters. It is unparalleled in all of Asia. A comfortable reading space was designed with French minimalism in mind, furbished with exquisite collections, and new software/hardware equipment. Occasional multicultural events will be arranged to enable the public an understanding of the French culture.

The National Library of Public Information is committed to promote multicultural services, as well as information from different viewpoints in response with the current trend of globalization. With this goal in mind, the French Corner is a collaborative indicator project between France and Taiwan. Bureau français de Taipei - Centre de coopération et d’action culturelle provides its publications and digital collection resources from the National Library of France.

Currently, we host over 1200 imported French books and Chinese translated versions in 16 categories of: arts, culture, fashion, design, cinema, tourism, and cuisine. Even people not educated in the French language can still enjoy all sorts of published works and have a good read. To commemorate Ms. Hu Pinching for her contributions in the promotion of works from French writers, and her Chinese-translated versions, a special "Les bourses de séjour aux traducteurs" area was set up to exhibit relevant works.

Based on considerations for multiculturalism, the French Corner also provides audio-visual and computer equipment, including a large-screen digital TV, authorized by TV5 Monde, the largest French entertainment channel, to regularly play its French programs and films. The French Corner also has a touch-screen computer, connected to the LA FRANCE A TAIWAN Centre de coopération et d’action culturelle's website "Voilà Taiwan." It contains the latest France-Taiwan joint-events, updating the audience with the latest information at any place, any time.

In order to enliven the role of the French Corner, we will periodically hold orientations for people wishing to study abroad in France, as well as series events, including: writer lectures, illustrator seminars, French movie shows, French lessons, and art exhibitions. Through promoting these events, we aim to provide a rich cultural discipline and information while interacting with the public to deepen the understanding of the long French culture!

(QRCode links to BC video introduction)

In order to develop multicultural services and to promote cultural exchanges, we signed a memorandum of agreement with the British Council's Taipei Office on December 22, 2011 as the beginning of our collaborative efforts for the British Corner. Through the establishment of partnerships, we collect relevant publications, audio-visual data, promote studying abroad, and Britain-related events encompassing the areas of education, examinations, culture, English-learning, tourism, and arts. The British Corner is located in the multicultural service area on the third floor of the library. The spatial design adopts the attractive modern British style with good lighting and bright colors. We provide info from British cultures, history, society, geography, to studying abroad, as well as holding periodic cultural exchange events in accordance with public interest, including seminars, lectures, cultural events, and educational exchange plans. We also provide a large digital TV showing BBC news live, enabling the general public to enjoy the diverse knowledge and services of Britain.

In response to the increase in new immigrant groups, we have also started adding multicultural data from Southeast Asia to our library in recent years. In correspondence with the establishment of the new "Multicultural Service Area", we formulated the "Southeast Asian Library Data Development Long/Mid/Short-term Plan" to expand our collection on Southeast Asian multicultural resources. We hope to provide a quality channel of book selection and procurement in order to assist county and city libraries in procuring Southeast Asian books and materials in the future for the reading needs of new immigrants in various counties, cities, townships, and villages. With the subsidies from the Ministry of Education's "Reading Promotion Project", we evaluated the priorities in procuring our library resources in accordance with the Southeast Asian population distribution and number stated above. We are currently actively collecting Southeast Asian books and materials from six languages, including Vietnamese. For the data categories and themes of Southeast Asian countries, we currently have collections from Vietnam, Indonesia, Thailand, Burma, Philippines, and Malaysia in the categories of: books, newspapers, magazines, and audio-visual data for the reading pleasures of Southeast Asians in Taiwan. The scope of our collection includes: spiritual growth, parenting, food, home health care, home design, self-encouragement, language and literature, tourism, and children. Until now, we have a collection of close to 8000 books. The Southeast Asia New Immigrant Collection is located in the foreign language collection area on the fifth floor. Southeast Asian Cultural Exhibitions are held irregularly beside the Senior Exhibition Area on the third floor, including book fairs and cultural fairs.

The Indigenous Resource collection was an integral part of our library. In order to enable a complete understanding of Indigenous-related themes, we especially set up an Indigenous Resource Center inside of our Taiwanese Books Section. We have approximately 5,500 representative books in our indigenous collection on the themes of indigenous society, culture, history, clothing, traditions, ceremonies, and photos for the reading pleasures of the general public. Decorations in indigenous styles are added to the sides and top of the shelves for easy identification. Additionally, reading tables and chairs are provided to plan and conduct indigenous-related book fairs to attract readers to the area, and give them a difference reading experience. In the future, more books and materials regarding indigenous topics will be added, in order to provide the general public a more comprehensive and macroscopic understanding.